As the NFL advances its playoffs, by now most if not all fantasy football seasons are over. If you’re like me, you’re looking at this season and wondering what could have gone differently to lead you to the championship. You’re probably looking for an explanation to your wives / significant others on how you could spend time and money on something and have nothing to show for it as well. Especially, if you’ve finished in the money each of the previous seasons you’ve played. Fingers crossed that next season, I can finish with some extra pocket money! With that said, here’s some of my takeaways from this season:

1/ Injuries are unavoidable, but durability matters.

This year I took David Johnson with my first round pick. He had a history of being injured (as I’ve had him in 2017), but thought I was getting a great value pick. (Narrator: It was not a great value.) He had just 5 full games completed, was limited in 7 games and out during the rest. I offset this by using a late round pick to grab his back up, which offset the injuries a little. Being limited in those 7 games though hurts your chances of winning though when you get those 0-5 point games from a player you were counting on.

2/ Waiver wires win championships, but when and how much is a player worth?

If you just have a standard waiver wire where you pick purely based on order, then there’s still value here, but having an idea of what your league generally bids for players is an advantage to exploit. For example, my league rarely bids more then $5 for waiver wire pickups beyond week 1 and rarely more than $10 for week 1. There’s $100 available for the season. This meant that those surprise players that appear in the first few weeks can be gotten to massively improve your roster quickly without leaving you stranded later. The player who went on to win the league picked up Lamar Jackson after Week 1 for $8 of his $100 budget. I on the other hand picked up Danny Amendola for the same $8. You can bet he spent his money better than I did. It’s like spending the same amount of money on a Lamborghini versus a minivan.

3/ Variance happens and its unavoidable. 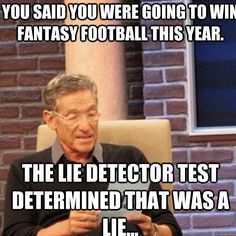 That’s the most frustrating part or enjoyable part of the game. Depending on which side of that break out performance you are on of course! Telling your wife that you’ve got this great team and are one of the highest scoring teams, but having the worst record is difficult to comprehend when you don’t play and at times even when you are playing. It’s hard to explain without an example. This year I finished the regular season with the 2nd highest point total in my league. I had a record of 2-10. It just so happened that I had the most points scored against me as well by about 8 points a game. I lost 6 games by 3 points or less. That’s just bad luck with the break out games!

This year the team with the best record didn’t win the championship. As a matter of fact, since the league was put together only once has it happened. That was last year when the league champion had Patrick Mahomes’s amazing season. As players rest in week 16 or 17, this could be your playoffs and championships games. When teams have a set playoff spot, they tend to rest their players. Make sure your paying attention to your player’s team standing as well and try to pick-up some players you know are going to play and contribute in those final weeks.

5/ Don’t only use resources from the website that you draft on.

There are plenty of sites that offer general fantasy advice, but make sure that it matches your league scoring settings. My leagues uses half point PPR. If you have a draft sheet with rankings for standard or PPR leagues, neither are going to be fully right for your specific draft. A quick Google search though will net you a number of resources that can give you an edge on your draft as you prepare for next season.